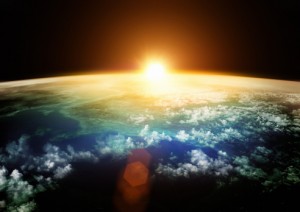 What happens when you cry in space? Why do astronauts use tortillas instead of bread for their sandwiches?  When you look at Australia from 220 miles above earth, why does it look like a Jackson Pollack painting, and how many different shades of vivid, aching blue can you see in the Bahamas?

Commander Chris Hadfield’s explorations brought him hundreds of miles from Earth’s surface, but as much as he discovered about space, he discovered – and shared – even more about “the only planet we have ever called home.” From the small details – how do you brush your teeth or wash your hands – to the grand – isn’t it surreal how peaceful Syria looks – Chris Hadfield documented his time on the International Space Station (ISS) through tweets, YouTube videos, webcasts, and, of course, an incredibly tight rendition of “Space Oddity.” He brought us into space with him and showed us Earth in an entirely new way.

Back on Earth – and at the University of Waterloo

“No place feels like home to me except southern Ontario. I felt like I was visiting everywhere else.”

In December, Commander Hadfield held 650 people at the University of Waterloo captive with his first lecture.  After orbiting the Earth 2500 times, he’ll be a professor in the Aviation department here. I’m not often star-struck, but come on! This guy’s an astronaut and a rock star.

What’s so striking about Commander Chris Hadfield, though, is that he has managed to engage Canadians, and people around the world, in the space program. We’d been to the moon; we’d seen images from Hubble. So what? Old news. Been there, done that. Hadfield did more than command the International Space Station; he made space cool again and reignited a passion for discovery.  In his book, An Astronaut’s Guide to Life on Earth, he describes (beautifully) hurtling into space and that moment when he leaves gravity behind:

“I feel like a little kid, like a sorcerer, like the luckiest person alive. I am in space, weightless, and getting here only took 8 minutes and 42 seconds.”

Tweeting at 28 kilometers per second

The ISS orbited the Earth once every 92 minutes, and through Twitter, Reddit, and Tumblr, we had a front-row seat. His 20,000 Twitter followers grew to over a million. Among his fans, Captain Kirk himself. Canadian – yes, Americans, the Captain of the USS Enterprise is Canadian! – William Shatner reached out to Commander Hadfield, asking if the astronaut were tweeting from space. “@WilliamShatner Yes, Standard Orbit, Captain. And we’re detecting signs of life on the surface.”

Captain Kirk wasn’t the only one treated to messages from space. Through webcasts, he connected with University of Waterloo students. Through quick two-minute videos, he answered questions from schoolchildren, showing them how to make a sandwich and clean up spills. And then there’s the singing.

Commander Hadfield collaborated with the Barenaked Ladies on “ISS (Is Somebody Singing),” to promote music education in schools all over Canada. Performing from space, no one could resist calling the performance “out of this world.” He also recorded songs – an entire CD’s worth – up there: who knew? Pretty good acoustics in that “aluminum bubble of air.” David Bowie called his version of “Space Oddity” “possibly the most poignant version of the song ever created.” The video has been viewed over 19 million times.

He’s not the first person to tweet from space or send home videos (though he is the first Canadian to walk in space and the first person to make a music video up there). What about Chris Hadfield captivates the world? It’s his way of showing us Earth from a different perspective and at the same time as helping us see the possibilities beyond it.  In talking about the importance of the ISS, he said:

Any kid in the world, any kid standing on any shore line, whether it’s some comfortable place or it’s a desperate war torn place, any of those young people can look up and see a pretty good example of what people can do when they do things right.

We could all use a pretty good example right about now! One Twitter follower told Hadfield: “@Cmdr_Hadfield Your Twitter account continues to be my favorite thing on the Internet. Thank you for showing us the world.” It’s something to see.