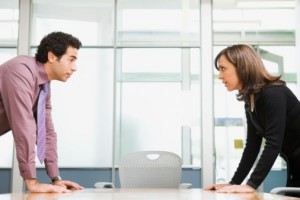 What Montessori Can Teach Adults

My kids went to Montessori School: when they and their classmates had squabbles, the teachers told them, “Work it out.” They train children at a young age to engage in open communication, discuss the issue, and figure out a solution.

At work, you hate to have to act like a teacher or a parent; you shouldn’t have to get involved in the grownup version of “He took my toy,” or “She looked at me funny.”

I’m not even remotely suggesting that managers and leaders turn a blind eye to bullying, harassment, and other toxic situations. Those belong in a whole other category. I am saying, however, that you shouldn’t have to get involved in minor disagreements or clashes that can safely and effectively be handled by the parties involved.

Where Managers Do – And Don’t – Belong

Here’s a common example of interoffice conflict: Employees A and B are working on a project together. A wants to take this approach; B wants to take this other approach. Simple enough, but it devolves into a situation in which each thinks the other is wrong. Each believes that he or she is the sole voice of reason; each is fully convinced that he is completely and absolutely right. They fight, they bicker, they badmouth or gossip, and they work at cross-purposes.

We’ve all been in these situations before and didn’t you just feel like saying, “I’d agree with you, but then we’d both be wrong.” But now you’re a manager, and that’s not how to fix the problem. If the manager does have to get involved, inevitably it is because one or both of these people is an ineffective communicator. They need some training, some guidance to help them develop – and to help ensure that this is the last conflict that they need to call the manager in on.

Open-Minds: The Key to Dealing with Conflict

It’s not possible to be 100% sure of anything in this world. If you’re absolutely sure of something, your mind is closed to other possibilities. What happens with people like A and B is that they’re so certain they’re right, that they can’t entertain the notion that someone could be “more right.”

Managers need train, encourage, and model thinking like this instead: “There’s a reason why B wants to go at the project this way. I want to do it differently, but maybe I can allow for the possibility that his way is better. Anyway, I’ll hear him out, and we can work on it together.”

Pride Gets in the Way.

When employees can learn to humble themselves and realize that the other person has the better idea – and that it’s ok – they put themselves in a position to learn. Acknowledging this to the other party builds trust. It builds relationships. It allows the manager to hit the gym because he doesn’t have to mediate the bickering. This is the type of culture you want to cultivate: one in which employees are motivated not by being right, but by achieving objectives efficiently and effectively – no matter whose idea led to the results. As president Harry S. Truman once said, “It is amazing what you can accomplish if you do not care who gets the credit”.

Work it out. When you give your employees the training and the space to engage in open communication, discuss the issue, and figure out a solution, they’ll surprise you by doing just that. Imagine what you can do with all this newly acquired free time!