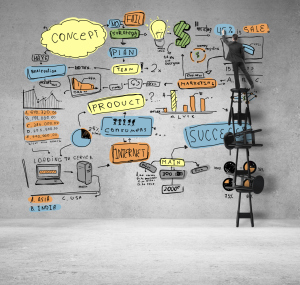 In his TEDx talk, filmmaker and minimalist Marty Stano speaks about his travels through Patagonia. Nearly out of money and food, he makes camp one evening in a drainage ditch near the road. Score! He says, “[D]id I seriously just become sincerely joyful and grateful over sleeping in a dirty ditch.” Yes, he did.

None of this is apropos of what I want to talk about today. Except for this: sometimes the greatest truths lie in contradictions. Less can be more. In Stano’s case, virtually nothing was a lot more! Work can be leisure. Leisureology is all about seeking these truths, even, and especially, if they fly in the face of convention. So, here’s one more: strategic creative. Challenge what you think about both – and you’ll see enhanced results.

Strategy and Creativity: Two Sides of the Same Coin

Strategy relates to identifying clear, concise, long-term goals and interests, as well as the means to achieve them. We usually consider it “left-brain”: logical, analytical, objective, linear.

Creativity, though: what does that word conjure up? Images of Van Gogh in a frenzy, attacking a canvas with frantic brushstrokes? Hemingway, losing himself in prose and mojitos? Usually, we think of creativity as – well, as somewhat mystical and ethereal. As a right-brain state in which there are no boundaries and in which we can produce imaginative, original ideas – the very definition of a flow experience.

Strategy and creativity, then, seem to be at odds: two separate processes, different areas of the brain engaged. And freelance rappers appear to prove the point. Their job: stand on stage and create entire songs on the spot, completely improvised. They depend on the ability to think creatively – and quickly.

Neuroscientists Allen Braun and Siyuan Liu set out to see just how creativity works in the brain, so they put top-notch rappers into an fMRI machine to study them while they freestyled. Braun said, “We think what we see is a relaxation of ‘executive functions’ to allow more natural de-focused attention and uncensored processes to occur that might be the hallmark of creativity.”

In other words, the artists could quiet, or shut off, the part of their brains that handles things like attention, logic, organization, and self-censorship. When they took themselves out of reality, they could create.

I call “bull.” At least a little. Here’s why: freelance rappers, like improv jazz musicians, have to know what their audience wants. They have to, to a certain extent, deliver targeted performances based on their audience’s expectations. If they didn’t, they wouldn’t get hired to perform (or get to do so in a big, metal tube).

There’s a big AND – or a big BUT – coming here. Consider this: the rappers were given an 8-measure backing track with lyrics to memorize. They did, and then were supplied with the same 8-measure backing and asked to improvise. Get it? They had a strategy. They had an objective. They had a mission to accomplish and the groundwork was laid. Does that mean they were less creative? No! In fact, they had to depend on and redouble their creativity to complete that mission.

Improv actors and comedians are challenged with the same task: creating an entire skit or show, virtually from nothing. Virtually nothing. When you see your favourite performers at Second City, for example, they’re typically given a suggestion, a game, and a set of rules for that game. They have to stay within the parameters. There is a method to their madness. Their creativity is informed by strategy. Rather than mutually exclusive processes, they can, and do, enrich each other.

A study on inprov comedians and theater actors conducted by the Georgia Institute of Technology found that “Improvisation involves decision-making based on domain-specific as well as real-world knowledge.” Their skits and routines don’t come out of the ether; they come out of their knowledge, experience, and skills. Strategy. Left-Brain, let me introduce you Right-Brain.

An Oxymoron – or a Great Collaboration?

Pairing strategy and creativity only seems natural, especially in the context of marketing communications. Creative is great only if it supports brilliant strategy – and has the legs to stand on its own. And no one has better legs than Captain V.

At Atlantis, we had the opportunity to design a branding experience for Valtrex, a herpes medication. Our “game” was to create a compelling story for the salesforce to use when pitching Valtrex to health care professionals, and our “set of rules” required us to incorporate the various benefits of the drug.

Sales reps had minutes, sometimes seconds, to pitch Valtrex, and the superhero character we created Captain V – flowing cape, tights, and all – helped them do that. Keeping the brand strategy top of mind, we turned what could have been an incredibly boring project into one that was memorable and effective. With creativity guided by strategy; a perfect partnership.

People could appreciate Captain V on his own. It was certainly a unique brand experience! But it resonated with the target audience because it advanced their objectives. It was like putting the pill in the ice cream: all the great taste of creativity and the healing powers of strategy.

Strategic creative may seem like an oxymoron on the surface. But that’s the great part about leisureology: it challenges us to look deeper. When we redefine what we think we know, we can engage and motivate employees, facilitate flow experiences and creativity, and achieve measurable gains.

Don’t wait for Captain V to save your workplace from boredom and subpar results. Do it yourself by challenging conventions, embracing contradictions, and infusing strategy with creativity – and creativity with strategy.