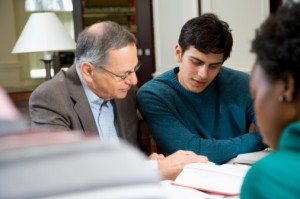 How do you know you’re a digital immigrant? You have to ask your 8-year-old child how to work your smartphone. You know more people IRL than you do online. Someone texts “SMH” or “IMHO”, and you have to Google it (if that last sentence meant nothing to you, try Urban Dictionary).

Gen Zs (those born after 2000) are digital natives, speaking Internet as a first language. They have armed themselves with the tools required by the 21st century—often at the expense of 20th century skills. The resulting Digital Divide is growing; those on the other side might want to start building a bridge.

An open mind is an absolute necessity. We (i.e. older generations, including Millennials) tend to think our way is the right way. We get stuck in the belief systems with which we were raised. When seeing a text full of emojis, abbreviations and acronyms, for instance, people tend to automatically say, “Wow. Darn kids! Gen Z—can you believe none of them can spell?!”

What we really need to ask ourselves is, “How important is that?” My kids grew up through the Montessori system where children are encouraged to start writing phonetically. Jump in, and say what you have to say, spelling be damned, at least at first. The goal is to get kids to communicate, to express themselves. Did they spell everything correctly? Maybe not. Did they get their message across? That’s what matters.

Looking at the Big Picture

As Gen Z comes of age, we have to look at the big picture and ask what’s really important. Take cursive, for instance. In a TodaysParent article, one mom talks about script: “If you can’t write it, how could you possibly read it? What about wedding invitations? Old letters you find in the attic from your grandfather? This is going to result in an entire generation of cursive illiterates.”

A Grade 4-5 teacher offers this response: “There are 78 separate learning expectations in the public school Grade 5 language curriculum I use…and teaching cursive isn’t one of them. We cannot add new skills and expect students to master them, plus all the traditional skills as well. Something has to give.”

What people tend to forget is that, “When one skill is lost another can be gained.” They may not know how to read or write cursive, but digital natives know how to communicate effectively with people across the world. They may not realize that “mispelled,” is, in fact, misspelled, but they can start companies and invent devices that change lives. It’s all a matter of perspective. Something lost, something gained.
Is it “wrong” that “screenagers” depend on autocorrect, that they write faster with their thumbs than they do with pens and pencils? Or is it simply contrary to the beliefs that we grew up with?

We have to challenge those beliefs. We should take note of what Gen Zs are doing, see where they’re having success, and get on board rather than lamenting the loss of old, and likely irrelevant, skills.

Don Tapscott, author of Grown Up Digital, says, “This is the first time in history kids know more than adults about something really important to society—maybe the most important thing.” As digital natives, they grew up seeing life on a screen. They can juggle media across five devices, and do as a matter of course. This is a seismic shift for those of us who grew up with, at most, a TV.

The Digital Divide, though, is a moving target. As Anne Kingston points out in Macleans magazine, “Technology is seen as the great generational divide here, but if there’s a pan-generational leveler, paradoxically, it’s technology, and the fact that we’re all equally hooked; adults are just addicted to older, in some cases, obsolete technologies.”

Older generations are not stuck; they’re moving, just not at the same rate or direction as younger generations. In that sense, the Divide is getting wider for many people. To close it, we need to look at it from an open-minded perspective: Why is this changing? What’s positive about it? How do we adapt to the good parts? How do we stop getting so wound up about the so-called, or perceived, bad parts?

Digital natives own the skills and aptitudes necessary not only to make their way in the world, but to make their world better. Those of us who speak technology as a second language need to bridge the gaps and become more fluent. Less cursive, more Snapchat.