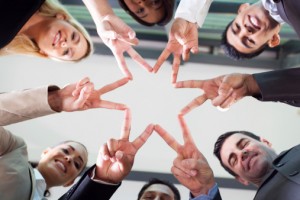 Why go to work if you don’t enjoy the people you have to deal with every single day? Can you imagine how awful it is to go somewhere for 8 hours, 10 hours a day, and not like the people with whom you are forced to share a space? It’d be like having to go to a family reunion with weird Uncle Al and crazy Cousin June every single day of your life. Awkward, uncomfortable, boring, and a little sad. JK Rowling wrote in Harry Potter and the Sorcerer’s Stone, “There are some things you can’t share without ending up liking each other, and knocking out a twelve-foot mountain troll is one of them.” Why shouldn’t knocking out a client proposal or creating a great presentation be among them as well?

The Science of Workplace Friendships

In case you’re the type to need some proof that workplace friendships are beneficial before you chat up your coworkers at the water cooler, here are some hard truths:

Just don’t try all this chitchat with Forbes contributor Susannah Breslin. In her piece on the ways women undermine themselves at work, she writes, “You’re at work, but why? My guess is that if you ask most men, they won’t say they work to ‘make friends.’ But sometimes it seems like that’s a big part of what women are doing at work. Bonding. That’s nice, but…work is dog-eat-dog, not kumbaya. I’m not here to make friends. Are you? Not with you. You eat dogs.

Let’s put aside the women vs. men aspect for now and concentrate on friendship. There is no benefit to competing against coworkers or to not bonding with them. There is absolutely not. Not if you’re a woman. Not if you’re a man. No, it’s not “kumbaya.” It’s work, and strong relationships facilitate work. It’s that simple. How?

You’re more likely to stay at work. People typically don’t want to leave a situation when they love their work because of the people, because of the fun. Sure, they may be able to make more money somewhere else, but it won’t compare to the friendships they have built.

There is a true sense of team. “Altruists” are more likely to help out coworkers, to use their strengths to counter another’s weaknesses – and to allow others to do the same. It’s like Carey Price, who made 24 thrilling saves for the Canadians during the gold medal game, and Sidney Crosby, who deflated the Swedes when he scored a breakaway goal. Each person, each friend, has his strengths and leverage them for the greater good. Who’d want to be traded from that team?

Dating shmating. It’s even ok if people date one another. Really. Why not? You’re in the same building; he or she will understand your work and the aggravations of your day. You can provide support to one another. And if you break up? Be as mature as you would if you got into a spat with your workplace friend. But what if you don’t break up? A CareerBuilder survey found that of 39% of workers who dated a colleague; 30% of those employees married their coworker.

The positives of workplace friendships far outweigh the downsides. Chatty is good. Goofing off is good. I’m pro-water cooler, and always have been. Friendships create a team environment in which people are more willing – and happier – to support and help each other. Beats sitting around all day with Cousin June.