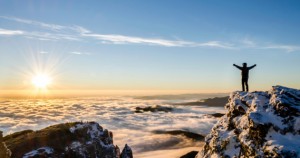 “To see the world, things dangerous to come to, to see behind walls, draw closer, to find each other and to feel. That is the purpose of life.”

Well, the purpose of LIFE magazine anyway. In The Secret Life of Walter Mitty, Ben Stiller’s eponymous character walks past his workplace motto every day, surrounded by photos of exotic locales and thrilling adventures– but in his own life, he hasn’t done anything or been “anywhere noteworthy or mentionable.” That’s about to change. Stiller, known for lighthearted, and sometimes crude humour, is at his best in this film. Walter Mitty hits home with a powerful message about dreaming big and living life to the fullest. That’s something we Leisureologists take very seriously.

Stiller, who also directed the movie, plays Walter Mitty, a Negative Assets Manager of Life magazine in its dingy, dated Film Development department. Though his job lacks the flash and glamour of the new age, Walter is deeply passionate and committed to his work. Sean Penn plays a small but important role as a famous photojournalist who, though he has never met Stiller’s character, trusts only him with his prize-winning photos.

Penn’s adventurous character acts as a catalyst for Walter’s stagnating life: Walter frequently “zones out” into fantastic daydreams of adventure and heroism, but believes his real life is held back by situations out of his control. The truth is, though he is unappreciated by his co-workers, Walter’s own fear and lack of self-worth are the biggest obstacles in his way.

When his life suddenly becomes an adventure more thrilling and fanciful than his wildest daydreams, Walter breaks the cycle of passivity and dissatisfaction. He crosses the world, survives near-death experiences and overcomes disappointment, all in a determined battle to restore one tiny missing negative. Driven by his passion, Walter’s work and life take on new meaning when he is willing to leave his comfort zone. We can’t all be swept up on cross-continental treasure hunts, but the lesson here is that we can make changes in our attitudes and behaviours to reach our potential.

More dramatic than comedic, Walter Mitty is visually stunning and emotionally inspiring. The film’s headline, “Stop dreaming. Start living” says it all. Enough excuses. Enough uncertainty and insecurity. Life is short; with a little motivation, a change in perspective, and the tools to re-examine our lives, we can all find more passion, engagement, satisfaction and happiness in our work, relationships and lives. Remember, “make your dreams your reality, not your reality your dreams”.