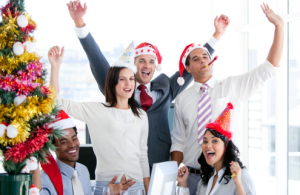 Why close up shop the week after Christmas? I think this is reason enough: I received not one, not two, but six pairs of battery-powered socks. Oh, cool, you might be thinking: so you’ll stay warm skiing? Nope. These – all six – looked like something a Dr. Seuss character might wear. They were fuzzy. And batteries were not included. I need a week to get these things out of my house and exchanged for, I don’t know, self-warming socks, I guess.

But, at the same time, there are equally, and some might argue, more, compelling reasons to stay open. The Week After Christmas – or “WAC,” – is now affectionately known by the very busy and the very lazy, as the most wonderful time of the year…to work.

Working the “Lazy Hammock” Week Between Christmas and New Year’s

While retail companies are engaged in a flurry of post-holiday sales (and returns!), and restaurants, cafes, and pubs stay open to nourish hungry shoppers, many other businesses experience a lull. Linton Weeks of NPR used a great phrase to describe this period, saying it “hung like a lazy hammock between the holidays.”

According to a Kronos survey, as the economy recovers, more businesses are turning out the lights for the post-Christmas week. Twenty-six per cent of full-time employees said their workplaces were closed during that time (up from 18 per cent in 2007). But what about the 74 per cent still clocking in?

The laid-back “lazy hammock” atmosphere is ideal for brainstorming, creative thinking, camaraderie, and preparing to kick off the New Year. People tend to be less stressed; the tension of holiday traditions, gift-giving, and family is out of the way. Typically, fewer clients are working. This means fewer deadlines, fewer obligations, fewer things you have to do – and more things you can choose to do.

Business as Unusual: Using the WAC to Test Leisureology

Why not capitalize on the post-holiday/pre-another-holiday vibe to see how leisureology fits into your workplace? For example, what if your people worked from home for either the entire week or a portion?

It could become a test of accountability: “We’re going to let you go freestyle this week. Here are your (measureable) objectives; this is what we need to accomplish. Feel free to do it anyway that works for you.”

If employees are well-supported, this could be a powerful opportunity. In fact, you might get a lot more out of them than if they had to sit at their desks from 9-5 all week. Especially at that time of year, when they’re likely to sneak a minute or two (or five hours) to put Christmas pics on Facebook or Twitter. Might as well set everyone up for success by allowing them the time and freedom to work and get their post- or pre-holiday planning, shopping, or social posting done.

This will only become more important as Gen Ys come to dominate the workforce: not because they “expect” the week after Christmas off, but because they don’t really buy into the 9-5 concept anyway. About 45 per cent of Millennials see flexibility as more important than even pay. If they can work at home, at the café, or on tablets from who-knows-where, what’s the big deal? It’s an attitude we’d all do well to embrace, particularly at this time of year.

At Atlantis, we didn’t close down because it was actually our busiest time of the year, prepping for national sales meetings and other events to be held January – April. We did offer people extra time, though: a half or whole day off on Christmas Eve, and the same on New Year’s Eve, for instance.

But in the main, we loved that week. Clients were vacationing, and we could get loads of work done. At the same time, it was fun! We got to goof around with each other, add some levity to our days.

Remember, work and life are integrated. We had a great week – in terms of attitude and results-because we were passionate about our jobs, and we could get into flow during that time. Maybe, with late mornings, early afternoons, “lost time” for returning gifts, etc., we worked about 2.5 to 3 days out of the 5. But, boy, did we get a lot done. They were among the most productive of the entire year.

There are legitimate reasons both to close and to work during the week between Christmas and New Year. Why not get the best of both of those worlds by staying open and incorporating a leisure ethic? That way, people get to return their “lovely” gifts (Thanks for the socks, Aunt Donna! Love you!), and move into a flow mentality that increases productivity and engagement. It’s the WAC gift that keeps on giving.