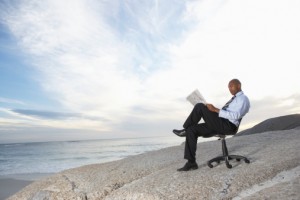 Q: Do you think I should implement summer hours in my company?

Ok, next question. Come on; I’m a Leisureologist. Of course, I think you should implement them. Preferably now so your team can start bragging to their friends as summer approaches. Truthfully, summer hours should be mandatory! They should start shortly after the last negative temperature reading and go until just before Christmas. I won’t go quite that far – you can though. Why not? Instituting a summer schedule from May 24 to, say, Labour Day or even Thanksgiving, can help reinvigorate your employees and celebrate a season that is far too short.

Let me take you back in time nearly a century ago. Picture it, Detroit, 1920s. A business owner decided to do the unthinkable: reduce his workweek from six days to five. “We know,” he said, “from our experience…that we can get at least as great production in five days as we can in six.”

Henry Ford may not have gone so far as to give his auto workers Friday afternoons in the summer off – perhaps he would today – but he did introduce a paradox of productivity: often, working less means getting more done. The question is, how do you structure summer hours so productivity remains as strong, or, better yet, becomes stronger?

Summer incentives come in different shapes and sizes: some companies tack on an extra hour Monday through Thursday and give employees every other Friday off; others allow telecommuting one day a week. My approach was to let people go at noon on Fridays. Just don’t stand between them and the door. The only condition was that their clients were delighted. By that, I meant if they had any deadlines or projects due for their clients, they had to have them done by 12:00. After that, they could go biking or hiking, read a trashy novel on the beach, or fire up the grill a little early.

We were in a great position to do this because a number of our clients also had summer hours. Instead of sitting around bugging us, they were out playing fetch with their dogs or working on their tans. The others, we trained. We just told them we had truncated Fridays, and they’d get everything they needed by noon. How can you argue? Sometimes, they even got things earlier than they would have otherwise.

In an emergency or a crunch, they could always call the account director’s cell, which was covered in sand. But he or she would pick up and take care of the situation. The point was, though, that the employees were responsible for making sure they were prepared and organized enough that they didn’t need to field calls on Friday afternoons.

Every week, there were at least a few people in the office on a Friday afternoon. They might have a big project due, and there was no way to cut out early. Sometimes they may have spent time catching up or getting ahead– some people like to work, you know! Especially when they don’t “have” to. Out of, say, 16 weeks of summer, each person probably enjoyed at least 12 or so free afternoons. That’s 60 hours of sun, 60 hours of family, 60 hours of gardening or catnaps – all at no cost to the company. The work is done; the clients are happy; the employees are ready to tackle the week ahead with renewed energy.

Besides the obvious! In addition to giving employees restorative time off, summer hours are a selling point. Workers, especially the millennial generation, perceive this type of flextime as a benefit, and they love telling their friends that they have these perks (which makes your company the place to work). Productivity doesn’t decrease; if anything, people figure out ways to become more productive and organized during the week so they can start their weekend early. When you have reliable, responsible people, they hold themselves accountable. Does it really matter if they leave at noon one day a week? Or 3:00 on a cold, winter afternoon?

Still questioning whether summer hours are right for your company? Maybe this will help sway you: you get to enjoy them too. As long as your work is done. Cut out early and enjoy some leisure time. You’ll be all for making them mandatory after one afternoon sipping iced tea on the patio, enjoying the sun while other people are inside toiling away. Not me, though. I’ll join you on the patio.