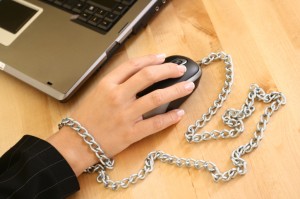 Work is the one addiction that most sufferers are proud to claim. You’d never brag about a pack-a-day habit to your friends, and you’d never say your addiction to online shopping is a necessary investment you’re making in your future. But, “I’m a workaholic,” seems to convey that we’re better than those 8-hour-a-day slackers, that we’re more committed, that we’re driven, ambitious, and deaf to the clarion calls of sleep. The truth is that workaholism isn’t about work at all. Psychologist Bryan Robinson once said that work addiction is the “best-dressed mental health problem” that exists. So why do so many of us suffer from it?

“Suffer” may seem like a strong word. It is. When someone is a workaholic, some other aspect of their life is suffering. Some fundamental piece is missing. They find success at work, and that’s where they stay. Maybe they are too afraid to try something different for fear they won’t excel. Maybe they’re avoiding something unpleasant, confusing, or uncharted – such as family life and relationships. Work is a balm, a drug that temporarily dulls feelings of fear, anxiety, or inadequacy.

Dr. Brad Klontz, Psy.D and financial psychologist, writes that workaholics “get adrenaline highs from work binges and then crash from exhaustion, resulting in periods of irritability, low self- esteem, anxiety, and depression. To cope with these feelings, workaholics then begin another cycle of excessive devotion to work.” Where’s the time for leisure? For sitting around in your sweats and reading? For seeing your family? Is “Cats in the Cradle” playing in your head yet?

Workaholics rationalize their behavior: If I work constantly now, I’ll have time and money to enjoy the future. If I work 18-hour days now, I will get ahead. Perhaps closest to the truth is: I have to. It’s expected of me. With mobile devices and cloud-access to work documents, more companies expect 24-hour access to their employees. Guess what? They don’t need it.

Harvard Business School professor Leslie Perlow conducted a study with Boston Consulting Group. Half of BCG’s executives reported working 65+ hours per week, not including the 20 hours they spent on smartphones. Perlow requested that each participant take a whole night off each week. Did the sky fall in? Not yet, and it won’t be BCG’s fault if it does.

When the execs took a night off – no smartphone, no email, no client calls – productivity increased. “They were planning better, prioritizing better, delivering better products to their clients. In the meantime, they had more predictability and control of their lives.” Imagine if they took two nights off.

There is a diminishing return on productivity when someone works more than 10 hours per day. If you stay at the office until 11:00 PM, how much do you get done? You’re putting in the time, but that doesn’t mean you’re doing anything. If you go home, get a good night’s rest and come back fully charged in the morning, you’ll accomplish much more in one hour than you did in four hours the night before.

Sometimes you do have to put in the extra time and effort. I owned an agency that was a sweatshop at times. One team might be crazy busy with a project, for instance, and staying late at the office. What I found, though, was that other teams would stick around too. They felt guilty or anxious when their peers were working feverishly and they could just go home. My message was, “If you can leave, leave. Your turn will come, and the other guys will get to go.”

Workaholics need to stop and realize that logging extra hours doesn’t net the same return. The last 60 minutes is never as good as the first – especially when it’s 12 hours later. You are much better off enjoying some recreation and rest, and employers would do well to make the same realization.

Work addiction isn’t about work. Where is the “excessive devotion” coming from – a bad marriage, a problem at home, a lack of leisure pursuits? When people address the core issues that trouble them (the ones they’re avoiding when they bury themselves in work), they not only free themselves from workaholism, they find that they get more done. It seems counter-intuitive, but breaking the dependence on work is a great first step in being more productive. It’s definitely a great first step toward being happier.